As a native Texan, I have nothing but the greatest of respect for Hispanic culture. It’s one of the roots of Texas society, after all, and in a wider sense American society as well — and it’s easy to see that it’s becoming an even more important part of our society, as the Hispanic population becomes increasingly larger and more vibrant. For that reason, I’ve tried to include as many Hispanic festivals and celebrations as I can find in this year’s list of Metroplex events, though heaven knows I’ll never be able to attend every one. I will, however, make an attempt to attend a representative cross-section.

Which brings me around to the first one of the year (at least the first one I’ve attended), the Festival de Primavera Musica (Spring Music Festival) at Trader’s Village, a venue I visited in February for the Vietnamese Tet-in-DFW Festival. I had this billed on my events page as “a Hispanic spring music festival featuring food, fun, and the area’s best Mexican musical artists,” and I guess two out of three isn’t bad. There was no food, but there were great musical artists and plenty of fun.

I do have to say that it was smaller than I had expected. Many of the events I’ve ferreted out recently seem to be, but that’s OK. In this case, the festival was hosted by a Hispanic music station that styles itself “El Norte,” 98.3 FM. It’s heavy on traditional Texas Hispanic music from mariachi to Tejano to conjunto, a kind of fusion of Spanish and German musical styles (that’s where they get all the accordions). As it turns out, they had only about a half of the Green Expo (which is where the Vietnamese festival was also), and just the one stage. 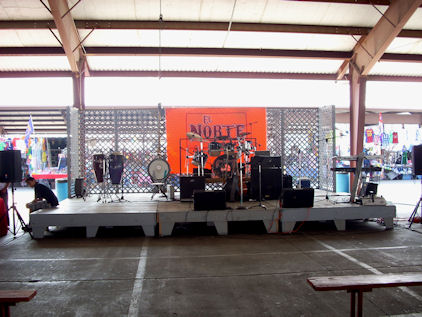 The rest of the Green Expo was dedicated to selling things like this:

In case you can’t tell, that’s a whole bunch of panties. They sell five for $10. I don’t know; is two bucks a good price for a pair of panties? I don’t wear ’em too often. In any case, since there was no food to be had (my bad), the festival was served by all the standard Trader’s Village concessions, including the snack-bar-on-wheels that I mentioned in my Tet-in-DFW reportage. I didn’t get any good piccies of that one then, so here ya go: 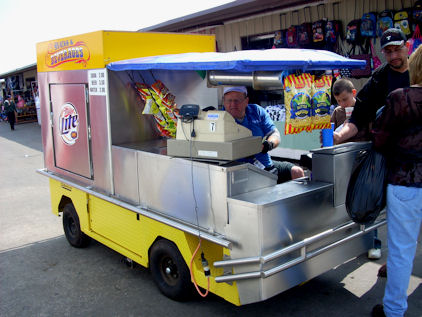 But back to the festival, which lasted from noon until 4 PM on Saturday, March 1. Attendance was light, though more people showed up as the afternoon wore on.

I enjoyed the music, but I have to admit I was a little lost most of the time; my Spanish isn’t the best ever, despite studying it for several years in high school and college (more than 20 years ago now, sadly). There’s something unmistakable about that traditional Hispanic sound — and when I say Hispanic, in Texas you’re mostly talking Mexican. In a sense it’s like the blues or jazz — you always know it when you hear it. And even when it’s upbeat, which it often is, there’s something of a high lonesome sound to it. I wouldn’t be surprised to learn that it’s one of the tributary genres that gave rise to traditional American country music.

I think one featured band that exemplified the sound, right down to the old squeezebox, was El Grupo Dragon (the Dragons). These guys are stylish: when they play, they wear black outfits decorated with crimson Asian-style dragons, and they have a great logo:

Here they are up on stage: 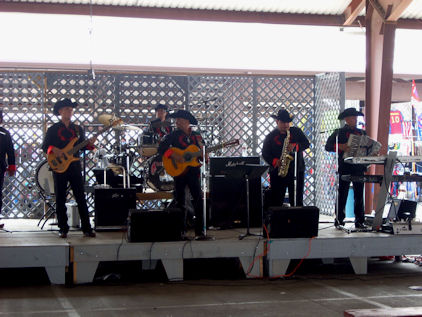 I liked them, but as you might have gathered, I’m no judge of Hispanic music. I’m not much of a fan of any music, in fact; I mostly listen to NPR. (Yeah, yeah: let the ragging begin). I do know what I like, though, and El Grupo Dragon (or EGD, as I like to call them) was good. The staging was well done, too; unlike some open air concerts I’ve been too, they didn’t try overwhelm you with a wall of sound.

All in all, I had a good time, though I could have wished for more. In any case, large or small, El Norte hosts their Spring Music Festival ever year on the first Saturday of March; it’s scheduled for noon to 4 PM.  You can learn more about it at their website, http://www.elnorteenlinea.com/home.html (you might have to use Google’s translation features if you don’t already read Spanish). To learn more about Trader’s Village and the festivities they host throughout the year, visit their website at http://www.tradersvillage.com/en/grandprairie. They’re open from 8 AM to dusk every Saturday and Sunday of the year. It costs $3.00 to park all day long, but otherwise it’s free.

Bad Behavior has blocked 278 access attempts in the last 7 days.