I’m going to warn you before I start that this entry contains crankiness. I’m going to try not to let it affect my review of the Festival itself too badly, but I have to tell you, it’s hard not to, considering how I was treated by the people running it. And I’m good at cranky.

First of all, there are very few pictures here for a simple reason: they wouldn’t let me take any. This is why: 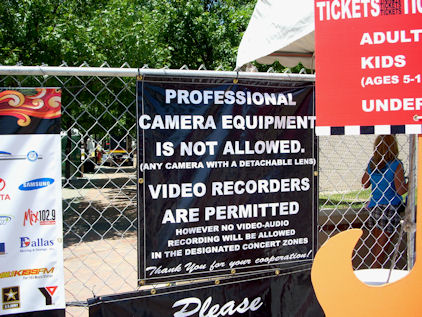 Now you might think, “Gee, Floyd, I thought you had a digital camera?” and you’d be right. As I’ve mentioned previously, I have a little Nikon Coolpix L11 that works just fine for most of my needs, except it’s hard to take wide-angle shots with it. So guess what I did a few weeks ago? I spent $50 on EBay for a detachable wide angle lens for my Coolpix. It was made for other Coolpix models, but I adapted it to mine just fine. Well and good, eh? Well, look at the sign again.

Just to be good, I asked if my camera counted. Of course it did. I didn’t really think they’d be so zero-tolerance about a little digital camera, which normally doesn’t have a detachable lens and can function just fine without one. I even asked them if I could take the lens off and leave it in my car, and then come back and take pictures for my blog, and they said NO in no uncertain terms. I might use them to make money, and that might be considered professional.

Okay, I know when I’m licked. So I took some pictures of Time Warner’s advertising SUV and the entrance to prove I was there, and took the camera back to the car. 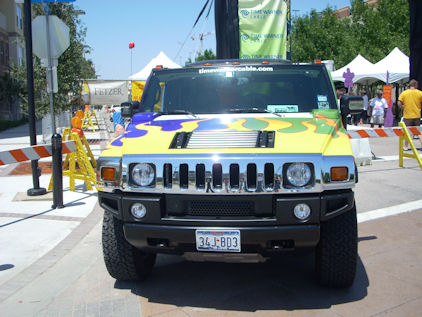 Then I started to go in, and realized that the entire gate was plastered with signs about what we couldn’t do once we were in there. No pets, no professional cameras, no audiotapes, no audio-visual (which means no camera phones even), no backpacks, no outside food and drinks, no this, no that. They even wanted to search everyone’s purses, which I felt was an unforgiveable breach of privacy. We hesitated before I went in, since my sister was carrying a purse.

Eventually the woman at the gate snapped, “Are you going in or not?” Now I admit I was dithering, but that was just plain rude. I was very tempted to leave, but I was there to do a job, so I forked out $45 for three of us, and my sister let them paw through her purse.

Forty-five bucks was too much for what we got. It was the same loud, busy, artsy-crafty music-festival atmosphere I’m used to seeing a lot lately, with all the same expensive food booths and places to buy trinkets, but it was way overpriced at $15 per person, which is twice what they used to charge a few years back. I imagine they had to pay their Big Name Stars, so I can understand that, I suppose. Doesn’t mean I have to like it. I can say, to their credit, that we got free Spam samples, and Coca-Cola was giving away cans of their orange Full Throttle energy drink. It wasn’t bad, but apparently people didn’t like it much — there were half-full cans scattered all over the festival grounds and the trail to the parking lot, leaking out their day-glo lifeblood on the concrete.

All in all, the Wildflower Festival itself wasn’t such a bad experience, once we got in. But you know what? Considering the price and the hype, it should have been more. It should have been the Six Flags of art festivals. Admittedly, it was nice, big, and diverting, but it just didn’t seem anywhere as large as the ones I’ve attended before. Maybe it was because the whole area here at the intersection of Galatyn and Central Expressway was enjoying a construction boom at the time, so events were limited. Maybe it’s just because I attended on the last day. Maybe my memory’s faulty. Maybe it’s because I didn’t get to take pictures to keep my memories fresh. But I’ll tell you this: I enjoyed the Cottonwood Art Festival back on May 5 a lot more, even though I briefly lost my phone. Oh, and by the way — the people there were nice; that always means a lot to me. To the people who greeted me and mine at the Wildflower, I was just an annoyance they wanted to get out of the way. Hell, it wasn’t that busy.

And speaking of construction, which I was a little while back: later, when we went back to the car, we got yelled at by an idiot security guard because we were cutting across a construction area. Well, how were we supposed to know that? First of all, no one was working. Second, there were no signs. Sure, there were a few plastic barricades put across parking lot entrances, but we figured that they were there to keep people from parking in those lots. Well, okay, we were wrong. The guy didn’t have to be a jerk about it. So instead of walking across about 100 feet of space to get to our car, we had to follow sidewalks for about a quarter-mile to get to it. Annoying, though hardly traumatic, but it added a sour finale to an already disappointing experience.

In my opinion, the Wildflower Festival isn’t what it used to be. Maybe I just let my experiences color my perception. I can say that if you want a country fair atmosphere combined with a classic music festival experience, why not go? They usually have a lot of good acts, including a few big names from the days of yesteryear. This year Pat Benatar hit us with her best shot, which was apparently still pretty good (didn’t see it myself).

If you want to attend next year’s Wildflower Arts and Music festival, keep an eye on their website at http://www.wildflowerfestival.net/. They ought to have the new festival dates up soon.

Bad Behavior has blocked 570 access attempts in the last 7 days.