The city of Dallas is well known for a lot of things, but one of the saddest is how incompetent its police force was back in November 1963. First, they let the President of the United States get assassinated right in front of their noses; then they let the assassin get away and murder a police officer before he was caught; and then, when they did catch the assassin, they let him be executed by a disgruntled restaurant owner while he was in their custody. The Secret Service didn’t have a lot to be proud about back then, either. It really is enough to make you wonder about a conspiracy, but I’m of the opinion that one should never underestimate the power of stupidity. It’s easier to explain the assassination of John F. Kennedy as a result of simple bureaucratic ineptitude.

Plain and simple, JFK’s assassination was probably the single most historically significant event in the history of D/FW. And what have we done with it? We certainly haven’t forgotten it. In fact, we’ve turned it into a tourist opportunity. I’m not talking about the grand limestone cenotaph of the Kennedy Memorial, which sits next to the famous Dallas County Courthouse called Old Red (both of which will get entries of their own on this blog). I’m talking about the Sixth Floor Museum, which takes up the entire floor of the former Texas Schoolbook Repository Building where Lee Harvey Oswald set up his little sniper’s nook and shot the President as he rode past Dealey Plaza. 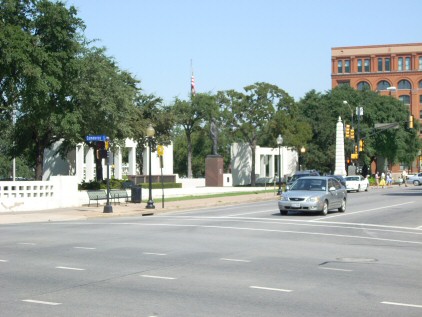 The Sixth Floor Museum isn’t the weirdest museum in D/FW — we have a JFK conspiracy museum and a telephone museum, among others — but it seems a little ghoulish to me. Informative and respectful, certainly, but ghoulish still. The Texas Schoolbook Repository is now used mostly as an administrative building for the local government, but it looks more or less the same as it did on November 22, 1963. 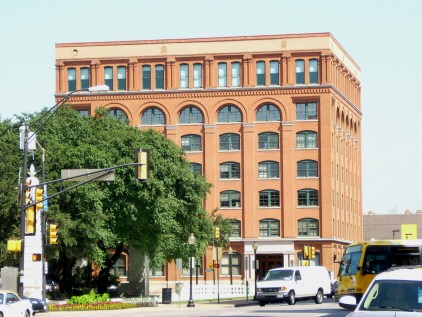 Now take a closer look of the sixth floor. See the window on the far right? See how it’s propped open? 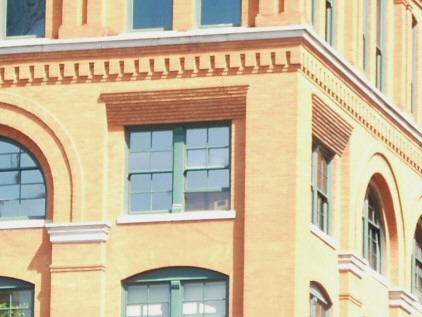 That’s the one Oswald shot the President from, and it looks basically the way it did when the authorities found it. He just opened the window a bit, steadied his rifle on a box of school books, and opened fire when the Presidential limo got close enough. It only took one bullet (despite what the conspiracy theorists say). His bullet struck the president in the head, killing him; passed through the body of Texas governor John Connally, crippling him; and psychologically scarred poor Jackie Kennedy for life. One bullet, and a nation was changed forever.

You can bet that the Secret Service no longer publicizes the President’s motorcade routes the way they did back then, and they sure as hell secure all the buildings along those routes. Even so, they let Ronald Reagan get shot in 1981. No one can say it’s an easy job.

The Sixth Floor Museum isn’t very big, but it packs a lot of stuff into a small space. You get more than just info about and speculation on JFK’s death. There is that, but it’s part of a package that includes a lot more information about the Kennedys and their history. For example, did you know that JFK and Jackie had a newborn son, Patrick, who died just months before JFK was killed? I didn’t, until I visited the Sixth Floor Museum.

Despite the sadness and scandal that surrounds the murder of John F. Kennedy, not to mention all the controversy, the Sixth Floor Museum is necessary. It’s an important and dignified tribute to one of the most popular Presidents in modern history, and fulfils, if nothing else, a “lest we forget” role. It also represents a more innocent time, and stands as a memorial to a national tragedy that wasn’t equaled until 9/11.

Photography isn’t allowed in the Sixth Floor Museum, but here’s what the entrance looks like from outside, complete with a nice young lady for scale (and yes, it was really bright when I took this picture). The entrance is tucked around the side of the building, around the corner from the side of the building where the President was shot, and there’s a nice little gift shop immediately adjacent to it, selling everything from JFK campaign buttons to models of the car he was killed in.

This isn’t the last you’re going to hear from me on the JFK assassination; it’s too big in our history, and they are too many things associated with it. In future exciting episodes, we’ll discuss the Kennedy Memorial, Dealey Plaza, the famous triple-underpass, <> and more.

Bad Behavior has blocked 483 access attempts in the last 7 days.