We all love odd and amazing things, right? Well, here’s a treat to enjoy while you’re visiting the Metroplex. On Highway 30 in Grand Prairie, halfway between Dallas and Fort Worth (and not far from Six Flags), sits this castle of commercialism, like something out of a Disney fantasy. 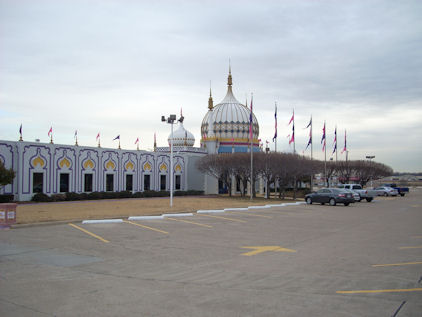 Recognize it yet? No? How about…now? 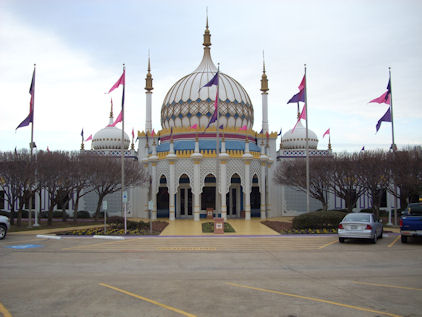 Don’t those onion domes and minarets kick architectural ass? Why yes. Yes they do. We don’t see that kind of thing all that often around here, except for the occasional mosque. Oh, and there’s that cool-looking Coptic Catholic Church in Richardson, which the congregation was very careful to identify as such with big banners right after 9/11.

But anyway. The above is, of course, the grand edifice of the local Ripley’s Believe it or Not Museum, as you must have surmised by now. Nope, can’t put anything past you, especially since there’s that giveaway title right up there are the top of the page. Interestingly enough, the architecture isn’t based on Eastern architecture; not directly, anyway. In fact, it’s a reproduction of British King George IV’s Royal Pavilion at Brighton, which was itself styled after an Indian palace.

As you can see, this is a combined attraction, with Louis Tussaud’s Palace of Wax under the same roof. And it doesn’t say so on the sign, but there’s a third way-cool attraction: Ripley’s Enchanted Mirror Maze. Three attractions under one 41,000-square-foot roof: is that not a bargain? I can proudly say I’ve seen it all and you should do, but beware — it ain’t cheap.

The Ripley’s section is fascinating stuff, though somewhat unsurprising if you’ve ever seen the Ripley’s Believe It or Not comic or TV show: all kinds of bizarre natural oddities, human and otherwise, including theme videos. I have to say that the simulated earthquake and tornado were, well, hair-raising, and it was fun to walk across that bed of hot coals. They have pretty good explanations of all these phenomena, too.

As for the Palace of Wax, it was pretty eerie. All those blankly-staring waxy figures of everyone from President Clinton to Mother Teresa to (shudder) pre-shears Britney Spears. I kept thinking about that horrible Paris Hilton movie House of Wax, which my niece made me go see with her. In that movie, all the wax figures are corpses underneath. Now I doubt that was the case here, but it may be that House of Wax has ruined me for any real houses of wax, or Palaces thereof. Be that as it may, in all they have 200+ wax figures on display, including every one of the American presidents, and some interesting themed displays including (of course) the Life of Jesus, and the Road to Freedom — although I must say, I thought their figure of Martin Luther King looked more like Eddie Murphy. Why is it that they can never get someone to look quite right in wax?

Oh! Something fun they do in association with the wax museum is let you make wax casts of your hands. It’s easy. You just dip your hand repeatedly in a warm mix of water and wax and eventually this builds up a wax “glove” on your hand that they peel off and lacquer so you can take it home with you. I didn’t do this — it was for the kiddies. And besides, the vats were too crowded for me to fit in.

The Mirror Maze — now, that was something else. The interior is so cleverly constructed and the mirrors so clean that you often can’t tell, at first, if something’s a doorway or a mirror — until, of course, you run into yourself. I’ll bet it looks funny as hell from the outside. Imagine yours truly groping his way through a brightly-colored mirror maze, whacking into himself repeatedly. Hours of laughs, you betcha! If it had been lit more dimly than it is, I’d probably still be in there.

As you might expect, I was told that photography was not allowed inside, which <> irked me as I later found several sets of Ripley photos on Flickr and such. I guess my little camera wasn’t good enough, or maybe I was just too goody-goody and could have done a better job of hiding my camera. This was annoying, but no surprise. All I was able to take a picture of inside was this cool tableau of statues made of found art. It’s called “Junk Art Tourists,” by Leo Sewell. I wonder if he was trying to send us all a subtle message with this piece?

I got a little more lucky outside. There’s an exhibit of metal dinosaurs out front which I found to be tres chic. Seriously, take a look:

Here’s a close-up of the Triceratops, which I was particularly taken with. Man, I’m so jealous of people who can be creative in this way! I didn’t catch the artist’s name, but when I do, I’ll post it here. 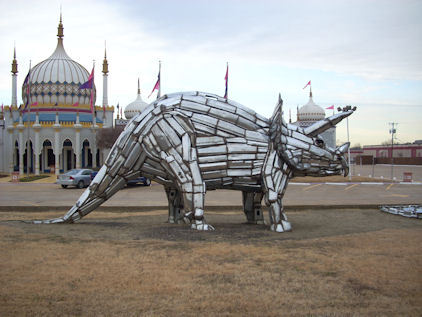 Warning: it’s a little hard to get there if you haven’t been before. You’ll have to exit at Belt Line Road and then take a left at the first stoplight. Go west about a quarter mile and then enter the parking lot from the rear.

Bad Behavior has blocked 294 access attempts in the last 7 days.